A few months ago, just as I was starting my small business course, I was doing some research into the online pin-up and vintage community. I wanted to find out the best groups to be a part of and to network with. Ideally I wanted predominantly Australian groups but if I could find others that fit my bill, I was happy to join those too. During this search I found Pin-up’s Against Bullying, Inc. – Australia. Straight away I felt the heart strings being pulled and I knew I had to be a part of this community, even if it meant just following and liking everything religiously.

What is Pin-up’s Against Bullying?

Pin-up’s Against Bullying was founded in early 2015 by American Pin-up Mrs “T” Marie, with a vision to provide support against bullying, body shaming, and all other negative ideals society has enforced on the young minds of our future. The Australian Chapter followed soon after, as did many other chapters around the world: Australia, New Zealand, England, Ireland, Scotland, Wales (inside, outside, donkey’s tails!), Canada, and the USA. England has three chapters, and the USA has one for every state. 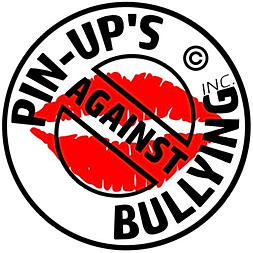 There was a post on the page calling for advocates all across Australia. I wasn’t a successful or well-known pin-up – heck I didn’t even define myself as a pin-up – so there’s no way I could even consider being a part of the Australian leadership group. And that’s when it hit me: I was standing in my own way of being a part of something that I truly believe in and wanted to be a part of.  I took a stand against myself and sent a message to the page. The worst they could say is no. I sent my message of interest off – it was now out of my hands. Derby Dollface, the Australian chapter leader, was quick to respond. Pleasantries and formalities were exchanged, and within a few hours, I was Pin-up’s Against Bullying, Inc – Australia’s newest advocate. I don’t ever remember not being bullied. Almost age 31, that really saddens me. High school was undoubtedly the worst time in my life. I started off high school chubby and intelligent, but even when I lost all the weight, I was still excluded, picked on, had things stolen from me, and was often the butt of many explicit jokes. I was always different to my peers, but tried to blend in as much as I could for fear of being bullied. I would avoid walking through certain areas to avoid being heckled by groups of teens – something that still plagues me as an adult, only now it also extends to other groups of adults. It’s a sad society when people are afraid to walk down the street for fear of being jeered at, harassed, bullied; or to put themselves in what they feel is a safe environment and still be excluded, mocked, ignored; and goodness knows what else. What’s sadder though are those who think that harassing someone online is okay because they’re not saying it to their face. This couldn’t be further from the truth. Bullying is rife on the internet, and it’s got to stop. Words are words. People have feelings. It doesn’t matter if it’s text on a screen or delivered verbally, there is no excuse for making another human being feel like a lesser person. We need to embrace diversity. We need to love one and other. Bullying stops here.

To this day, I’m still bullied, but I try to be the bigger person and not let it affect me. Some days I want to really let the person know what I think, but that won’t achieve anything at all. Instead, I remind myself why I joined Pin-up’s Against Bullying and surround myself with people who do love me.

A post on a blogger networking group I’m a part of last week asked bloggers what one thing made them feel confident and beautiful. Here’s my response.

“For me, the journey to self love has been arduous, but I’m glad that I’m there now. The one thing that makes me feel beautiful and confident is me. As self centred as that sounds, it’s true. I am the only person who can make me feel beautiful. Everyone else in the world can give me lovely comments but at the end of the day, it’s validation in the self that gets me through.I don’t wear make up every day but I don’t feel the need to. I love my skin (quite literally, it’s amazing) and it’s my choice to do with it as I please. Clothes, make up and accessories accentuate my beauty, they don’t make me beautiful. That comes from within. What I’ve learned from that realisation (beauty comes from within) is that as soon as you’ve cottoned on to that fact, it’s hard not to be confident and beautiful every single day.”

Walk tall, hold your head high. Be kind to yourself, and to others. You are worth it.

PS – I know what you’re all thinking: the apostrophe is not needed in Pin-up’s. This was an unfortunate mistake that has been noted several times over and PUAB have just decided to run with it as branding and marketing processes were already in progress.